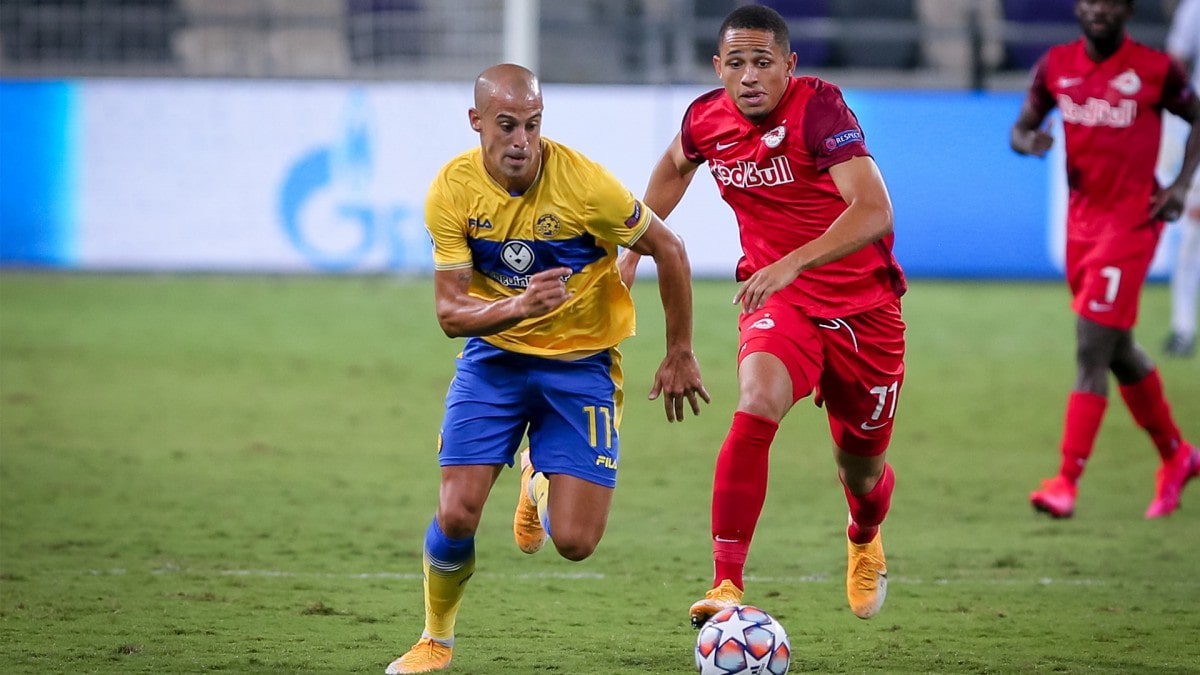 On Wednesday, Maccabi Tel-Aviv comes to Salzburg for the return leg of the Champions League play-offs. Salzburg defends their acquired advantage in the first leg while Maccabi hopes to turn things around.

Once again crowned last year, Salzburg accelerated at the end of the season in order to drop LASK and win his 14th Austrian league title, the 8th in the last 10 seasons. 2nd at the end of the regular season, the club of the Redbull subsidiary took advantage of the penalty points inflicted on its main competitor to preserve its domination over the Austrian Bundesliga. Lately, the men of Jesse Marsch had crushed the small club of Bregenz (0-10) in the Cup before showing consistency against Wolfsberger (1-3) and Rheindorf Altach (4-1) in the league. Picked cold by the Maccabi by conceding a goal in the first minutes, they were able to re-mobilize to win (1-2) then they continued in the league (1-3).

For their part, Maccabi Tel Aviv had no difficulty in gaining the upper hand over Maccabi Haifa last year in order to retain their title of champion of Israel. Despite this title, Giorgos Dennis’s men had to play all of these qualifications for the Champions League where they took the upper hand over Riga (2-0), Suduva (0-3) then Dynamo Brest (1- 0). On the other hand, last week, they could not keep their lead taken very early on the scoreboard and lost at home against Salzburg (1-2).

The staff for Salzburg vs Maccabi Tel Aviv

In Salzburg, the 2nd top scorer Hwang Hee-Chan (11 goals) left this summer for RB Leipzig but Lyonnais defender Oumar Solet is committed. Despite this departure, the offensive sector is not helpless since the striker Daka is still present and has already scored 3 goals in the day. In addition, internationals Stankovic (4 caps), Ulmer (19 caps), and Wober (6 caps) as well as the rising value of Hungarian football Szoboszlai (10 caps, 2 goals at 19) are also part of this formation. Absent last week, rookie Solet and important Junuzovic could still be missing.

On the Maccabi side, we rely on internationals like defenders Yeini (20 caps) and Tibi (43 caps), midfielders Glazer (8 caps), Peretz (16 caps), and Cohen (6 caps), and striker Almog. In addition, at the front, the experienced Shechter (ex-Nantes) is present and has scored 2 goals in 2 appearances in the league. This summer, Maccabi could not keep the important Geraldes and Micha but he enlisted the internationals Bitton and Ben Haim II. As in the first leg, substitutes Nikolic, Piven-Bachtiar, and Hozez are not expected to be present.

The key point for the match Salzburg vs Maccabi Tel Aviv

Although superior to its opponent of the day, Salzburg could win quite widely in this part. Salzburg victory!